The World Meerkat Project was started between December 2008 and January 2009 with the Embers, Cobras and the Earthstorm forming. The project began to have a new mob on October 9, 2010 when wild females teamed up with wild males and two Embers rovers to form the Johnny 13 Mob. Since then new mob have formed it the area.

Johnny 13 Mob was founded by six wild females, one wild male and two Embers males, Danny and Peter. Kitty won female dominance and Johnny won male dominance but he was overthrown a month later. Danny took male dominance after him. The Johnny 13 is currently one of the small mobs.

Embers Mob was founded by five wild females and five wild males. Sam and Santa became the dominant pair but three months, Sam was overthrown by Diana three months later. Diana became the new dominant female but she was over thrown a year later by Sam's daughter, Maddie. Santa died on November 17, 2010 from disease. Java, one of the founders took natal dominance but he left the group along with Sean. A Johnny 13 male, Johnny joined the group and became the dominant male. Cobras Mob 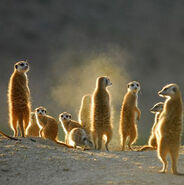 Add a photo to this gallery
Retrieved from "https://mkatsfanon.fandom.com/wiki/World_Meerkat_Project?oldid=20422"
Community content is available under CC-BY-SA unless otherwise noted.